Your Guide to Working Plumbing Fixtures: What to Replace and When to Do It 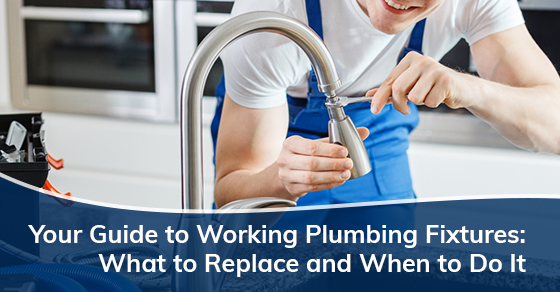 The thing about plumbing is, it’s often taken for granted. We all need clean water flowing in our sinks and toilets, but we don’t really think about the mechanisms that make this possible until they’re broken. Then suddenly, there’s no water being delivered and that’s a disaster. Braving your first plumbing fixture replacement is an unfortunate but inevitable rite of passage for every homeowner.

What if you’re not sure if it’s time for a repair or replacement? Don’t know what signs of telltale damage to look for in the tubs, showers, toilets, taps, dishwashers and more? Here’s a quick repair-or-replace guide straight from our professional plumbers. Not the DIY type? Our professional plumbers are just one call away from helping you inspect and replace your plumbing fixtures.

4 Undeniable Signs that You Need to Replace Plumbing Fixtures

When the toilet doesn’t flush

Flushing the toilet after use isn’t just about good manners—it’s also important to maintain a bacteria-free and pleasant washroom. So, when the flush doesn’t seem to do its job and the toilet keeps running and consuming more water than it should, you know that it’s time to call a plumber. Chances are, your plumber will find a failing flushing mechanism, and they will need to replace the moving parts that get the flush to work. Don’t be afraid to ask your plumber about the specifics of the tank and its parts that you need to replace!

From the get-go, a dual flush toilet sounds like twice the hydro cost, but it’s actually the opposite. As water costs rise, one of the most important upgrades you need to look into is changing conventional toilets to dual flush ones, as these newer models are more efficient in terms of water consumption.

Aside from keeping the hydro bill down, upgrading to a dual flush toilet can also be motivated by aesthetic reasons. If you’re in the process of remodeling your home, consider a new toilet to match the new interiors. A professional plumber can give you advice on selecting the best model in the market, along with installing other fixtures like showers, bathtubs, sinks, and bidets that you can upgrade along with the toilet.

From leaks to flushing issues, there’s a lot that can happen with a toilet over time. Simple issues like leakage on the washroom floor are easy to fix, as a plumber can easily replace the wax seal that anchors the toilet to the floor. But when the porcelain cracks, that’s a more serious problem. While porcelain toilets are built to last, these cracks can lead to more serious plumbing issues, and the best way to remedy the situation might be a complete replacement. When this happens, don’t hesitate to call a professional plumber. They can quickly assess the damage, put temporary fixes, and install a new toilet in place.

One of the most common plumbing fixtures that people don’t realize are most prone to damage are shower hoses, especially with handheld or ‘telephone’ models. The constant movement causes wear and tear over time, and this can lead to a rupture. Our professional plumbers can quickly fit your shower with a new hose, but in more extreme cases, replacing the entire shower system may be your best option. Don’t worry, though—this doesn’t include the intricate wall-mounted components, so this replacement is a pretty easy fix with virtually no downtime!

Knowing When to Replace Faucet Leaks

Perhaps the most common plumbing issue known to every homeowner is leaky faucets. After all, we use these fixtures so much that turning them on and off is second nature. But the moment they show signs of giving up, it’s important to pay attention to the signs of leakage and know when it’s time to call a plumber for a replacement.

When we think of leaky faucets, the first thing that comes to mind is a replacement. But did you know that faucets can be repaired? In most cases, though, a new faucet costs relatively less than a repair, so it’s better to get an upgrade anyway. Add to that, tarnished or nicked faucets are also a common cause for replacement. Even if the parts are working perfectly, these can be a sight for sore eyes, so a replacement becomes a must for aesthetic issues.

Signs You Need a New Faucet

Unlike aesthetic issues, simple leaks, or mere snags in the mechanism that can be repaired, you shouldn’t ignore these telltale signs that installing a new faucet is in order:

While a small leak can be a sign of a faulty mechanism that can easily be repaired, it’s important to think of when you first started to notice a leak and how long it’s been going on. If the problem is chronic, chances are, the faucet leak has been racking up your water bill for a while now. Plumbers recommend replacing your faucet altogether, and the savings you recoup from efficient water consumption will pay for the new faucet in no time.

Did you know that it’s not just faucets themselves that leak but also the gasket sealing in their handles? You may not notice it, but bathroom and sink faucet handles are also prone to damage that results in leaks. This happens as the fixtures wear down over time due to the friction involved in their motion. A telltale sign to watch out for is a leaking gasket seal, which can cause the handles to look like they are leaking themselves. It might not sound serious, but water damage can happen inside the wall, so getting a plumber to assess the damage and replace the faucet as soon as possible can reverse the damage.

Unlike tarnishing and nicking, rust and corrosion aren’t simply aesthetic issues that can plague faucets. Faucets rust and corrode due to exposure to different chemicals, which won’t just ruin their appearance, but also potentially cause problems, such as jamming, being loose, or worse, even health issues. When you observe this happening, don’t hesitate to call a professional plumber to replace your damaged faucets.

As a homeowner, it’s important to stay on top of all the parts and fixtures that keep your home in good condition. Just like replacing a lightbulb or wall-mounting appliances, ensuring that basic plumbing fixtures are working as they should be is an important part of maintaining a pleasant living environment; when all the parts are working, it’s truly home sweet home! If you are having trouble with even the simplest of plumbing fixtures, like a faucet that won’t turn off properly or a toilet that seems to never stop running, don’t hesitate to call a professional plumber for repair or maintenance services instead of attempting a DIY repair that could just further the damage.

To learn more about replacing the plumbing in your home, call Brothers Plumbing at ​888-950-3818 today or get in touch with us here.